HYK technology is backed by more than 10 years of research and development with different types of water, from drinking water to wastewater.

The HYK technology developed by Hydrokemos is an electrochemical technology

It is a specific electrochemical technology that eliminates nitrates and ammonium. It converts the nitrogenous species dissolved in water into nitrogen, hydrogen and oxygen gas, without generating waste, using electrical energy. Gases generated during the electro purification process can be discharged directly into the atmosphere, since they are harmless to the environment and human health. All the water is harvested. No waste is generated. That’s why HYK technology is considered a clean and environmentally friendly technology. 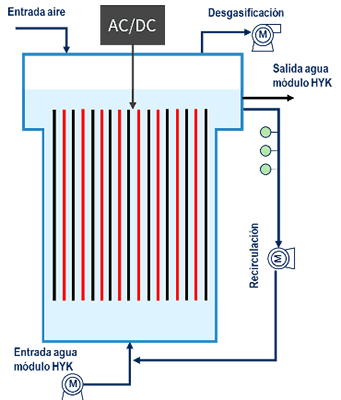 Structural diagram of an electrochemical cell of a Hydrokemos module.

The internationally patented HYK technology, financed and endorsed by the European Commission in the Horizon2020 project, is highly competitive in terms of capital and operating expenditure.

The features that set HYK technology apart from other currently
available technologies are:

It removes ammonium and nitrate

transforming them into nitrogen, oxygen and hydrogen gas,
without generating any type of solid or liquid waste

It is a very robust electrochemical technology.

It adapts easily to changes in the concentration of the pollutant and is not affected by changes in pH or temperature, among other parameters.

The operating costs of the process are basically the energy costs. 98% of the cost is the energy and only 2% the cost of reagents.

The system also features a remote control and remote management system. The customer can view all the operating parameters online and in real time. These parameters include electricity consumption, flow rates, or the ammonium output of the HYK plant, among others.

It harvests all water resources

The know-how of the process resides in the materials used as electrodes and in the specific operating conditions to eliminate the desired pollutants for each specific type of water, with maximum performance and at the lowest cost.

The chemical basis of HYK technology

The chemical basis of HYK technology from Hydrokemos is the oxidation of reducing agents, such as ammonium, cyanides, thiocyanates, sulphides and of course organic matter, using sodium hypochlorite. Sodium hypochlorite is produced on-site  through the anodic oxidation of the chlorides present in, or added to, the water according to the electrochemical reaction:

In an alkaline environment, the chlorine produced becomes hypochlorite. This is the oxidising agent that acts as a remediator, converting ammonium, cyanide, thiocyanate and sulphur into harmless gases (hydrogen, oxygen, carbon dioxide and nitrogen gas) that are released into the air, and sulphur molecules into suphates, which remain dissolved in the treated water.

The main oxidation-reduction reactions involved in the process of elimination of nitrogenous, nitrate and ammonium molecules are:

The HYK electrodepuration technology also simultaneously produces a considerable reduction in COD, conductivity and organic material, among other parameters. It is also capable of removing other common reducing water pollutants such as cyanides, thiocyanates, sulphides, sulphur and phenols.
The purification machinery uses purpose-built electro-chlorine generators patented by Hydrokemos. Broadly speaking, these are reactors containing titanium electrodes and other materials with specific characteristics, through which water is passed to receive a dose of electrically generated chlorine until it reaches the required level.

Hydrokemos is a leader in the development, manufacture, and supply of clean and innovative solutions for the treatment of any type of water
Contacta con nosotros

Linkedin Youtube
Menu
Created with ♥ by CREACTITUD
Política de CookiesThis page uses cookies and other technologies to improve your experience on our site: More information.